Convergent Dental has studied the dental aerosols and splatter created by Solea in several ways. Research was published in OAJDS showing Solea reduces the amount, speed and displacement of splatter relative to a conventional high speed dental drill.

The Convergent Dental R&D Team went a step further and created an in-vitro evaluation of live bacterial content in the aerosols and splatter generated by cutting dental enamel with Solea and with the drill. Not surprisingly, Solea created significantly less aerosolized viable pathogens relative to the drill.

Solea lasers are used by various medical specialties to remove/vaporize both soft and hard tissue, including oral tissues, such as enamel and mucosa. Vaporization of these tissues is thought to occur at temperatures high enough to destroy pathogens. However, droplets of water on the periphery of the target tissue area, created from the laser’s water-cooling mechanism, may absorb pathogens that are then dispersed into an aerosol, which has been reported previously. Conventional tools, such as high speed dental drills, use a similar water-cooling mechanism, but have significantly higher air pressure and water flow than Solea. Additionally, dental drills introduce the variable of mechanical energy by means of a cutting bur that rotates at 400,000 RPM to remove tissue.

A pilot study was performed to quantify live bacteria released in the splatter/aerosol following hard tissue removal by a Solea laser and a high speed dental drill. The study involved the use of 15 uncleaned, extracted human molars, with natural bacteria content (biofilm).

Solea was used to perform 10 seconds of laser irradiation on one side of each tooth at the recommended setting: 30% cutting speed, mist flow of 9 ml/min, and low air pressure (10 psi).

A dental drilling unit (A-dec PAC 1) was used with a carbide bur drill bit (FG 330) in a Midwest Stylus 360S handpiece at a nominal air pressure of 40 psi and water flow of 25 ml/min on the other side of each tooth for 10 seconds.

Bacterial activity was tested by collecting the splatter/aerosol of 15 samples onto TSA agar plates in an enclosed environment. The plates were mounted 15 cm from the teeth at a vertical angle of ~45° above the samples and a horizontal angle of 90° relative to the cutting direction, to allow any aerosolized live bacteria to be seeded onto the dishes in the direction that a practitioner would commonly be seated. The dishes were exposed for the duration of laser irradiation or drilling to allow for a direct comparison. The plates were then incubated for 24 hours at 35° C.

Colony Forming Unit (CFU), which is a measure of cultured viable bacteria, was calculated to estimate the livelihood of bacteria in splatter/aerosol generated by Solea and the high speed drill. 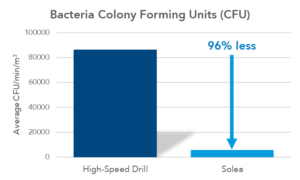 96% fewer viable bacteria colonies were detected in the splatter/aerosols generated by the Solea laser compared to that of the high speed drill. This is not surprising, as the temperature achieved while cutting enamel or dentin with Solea reaches more than 100°C, killing any viable micro-organisms in the laser beam’s path.

The results demonstrate Solea’s ability to significantly reduce aerosolized viable pathogens relative to the drill, and therefore, reduce the likelihood of transmitting diseases from patient to practitioner and patient to patient.

This in vitro study combined with the previous research highlights three major advantages of Solea vs. the high speed dental drill in the post-COVID environment: Solea reduces the amount of dental aerosols and splatter created, what splatter is created travels less far and contains far less pathogens.

>> Contact Us to Learn if Solea is Right for Your Practice