Reducing Aerosols and Splatter for Safer Dentistry with Solea®

Up to 99.9% Reduction in Aerosols & Splatter

Due to the recent COVID-19 pandemic, dentists are understandably concerned with the risk of disease transmission from patient to practitioner and staff. There is evidence that aerosol generated during dental procedures may harbor active pathogens that can infect the dentist or hygienist. Small, invisible particles may contain these pathogens to a small extent, but larger droplets and splatter are likely to contain significant concentrations of these active pathogens and are less easily removed by nearby suction.

To investigate how Solea® can help dental practices reduce the risk of transmission, the Convergent Dental R&D team designed two structured and controlled studies: a macroscopic and a microscopic. Study results demonstrate that Solea supports safer dentistry by reducing aerosols and splatter by up to 99.9% compared to the traditional drill.

The studies described below were performed by a dentist in a dental clinic using a conventional high-speed drill and the Solea all-tissue laser. Each study also used an HVE suction device during each procedure.

High-speed drills rotate at speeds up to 400,000 rpm, use air pressures in the range of 30-40 psi, and utilize water flows in the range of 30-60 ml/min. The high-speed drill used in this study rotated at 350,000 rpm, used 30 psi air pressure, and used a 50 ml/min water flow rate. These settings followed manufacturer approved guidelines and were deemed acceptable by the dentist.

Solea has a range of settings that can be adjusted by the practitioner. For this study, the following manufacturer approved guidelines were used: 10 PSI, 8 ml/min water flow, 50% cutting speed and 1.25mm spot size. These settings were deemed acceptable by the dentist.

The objective of the macroscopic approach was to obtain a visualization of the splatter and droplet spread generated during a hard-tissue dental procedure. To mimic this, extracted human molars were placed in a model of a human head, and mounted in normal positions inside the mouth. To clearly view the splatter created, food dye was added to the water reservoirs in both Solea’s and the chair’s system. The high-speed drill and laser were each operated for ~10 seconds.

The drill generated splatter as far as 45cm while Solea only produced minimal detectable splatter a few millimeters from the mouth (Figure 1). The study confirmed that Solea produces, at a minimum, 97% less splatter than the drill. 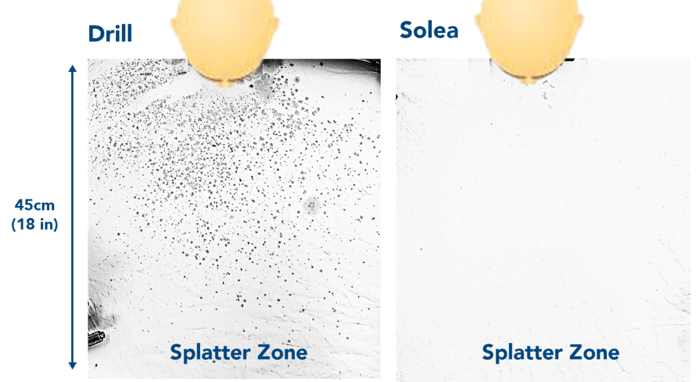 Figure 1. Images showing the splatter (darker color) generated by High Speed Handpiece and Solea on a cover sheet located above the operatory chair.

The aim of this study was to quantify splatter and aerosol residue created directly outside of the oral cavity. Extracted human molars were again placed in a model of a human head and food dye was added to the water reservoirs in both Solea’s and the chair’s system. Glass slides were placed at various distances from the tooth, and both the drill and laser were used to cut following the clinical settings previously described. The slides were then examined under a microscope to compare splatter coverage (Figure 2).

A computer program (ImageJ) was used to quantify and compare the total coverage area of the residue.

Figure 3: Quantification of splatter coverage at various distances from the tooth.

These structured and controlled studies corroborate that Solea supports safer dentistry by reducing dental splatter and aerosols by up to 99.9% compared to traditional handpieces. Solea achieves this by utilizing ~67-83% less water flow, ~74% less air pressure, and by cutting without contact, as opposed to drills, which cut using burs that spin at up to 400,000 RPM.

These findings support recent guidance provided by the ADA, recommending dentists use clinical techniques that “reduce aerosol production as much as possible, as the transmission of COVID-19 seems to occur via droplets and aerosols.”